The Top floor of the hab pod for the HADES Strike Cruiser Persephone. 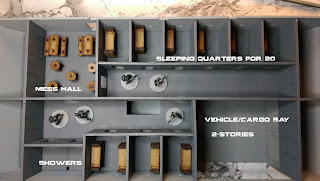 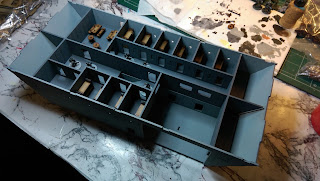 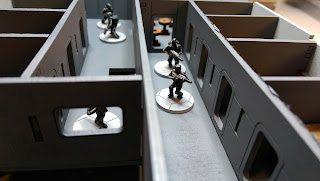 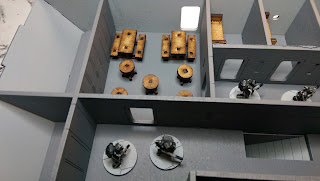 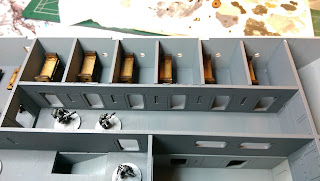 All furniture from Mad Mecha Guy.

I need to get armory racks, med bays and etc... probably from National Cheese Emporium
https://www.shapeways.com/shops/javelin98… That will all be for the first floor.

Super excited about this, and I think I could even do a small game just in here. It also has a helipad on the roof section, this pod could be dropped off somewhere as a temp HQ for operations.

And here's a WIP of the full spaceship: 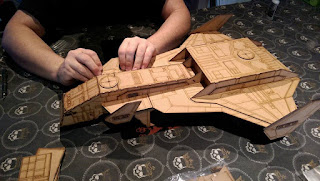 
Finished up my HADES Banshee VTOL. 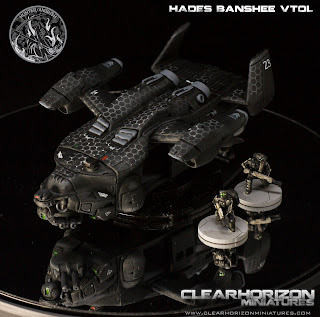 First I primed it black then I airbrushed dark grey and highlighted with light grey.

Then I airbrushed black and then Vallejo Air Color Gunmetal to highlight.

Then I inked with an AK interactive enamel black wash and cleaned it up with a makeup sponge and white spirits. 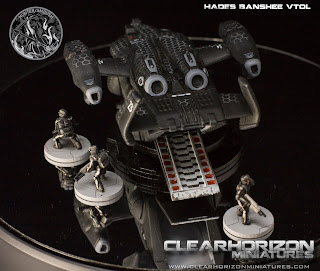 I went back and placed a small white dots where hexes met to highlight the pattern. I also picked out lights and optics with green or red and then green or red ink.

I painted gloss where the decals would go, mico-sol, applied decals, micro-sol again and then another gloss coat.

I then used a Tamyia Flat varnish and picked out the optics and lights with gloss varnish.

You can still preorder it at http://www.clearhorizonminiatures.com

Test Casts of the Banshee

First pictures of the test casts! (Cast by the very talented Jon at Paulson Games, Sculpted by Steve "Coolhand" Tyler) 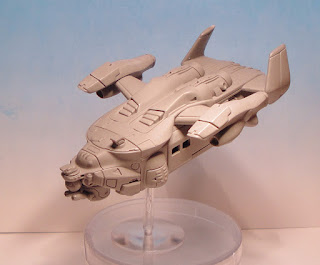 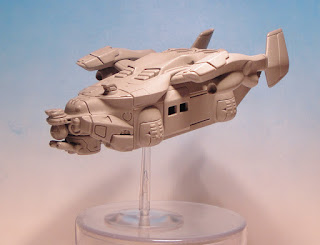 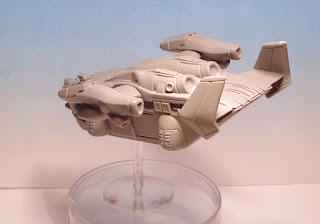 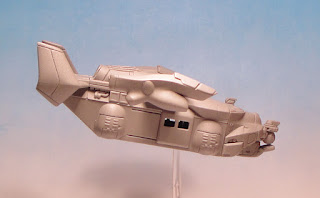 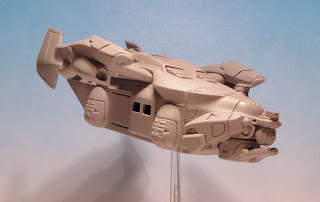 Note: the Banshee comes with landing gear pods in both the retracted and extended positions.

Pre-order soon for the savings since these will be in stock very soon!
__

Save 12% off the release price!

NOTE: This is a Pre-Order and should ship by mid-September. All orders containing a pre-order will ship the same time the pre-order is released.

The HADES Banshee VTOL is an advanced stealth assault craft designed to deliver HADES Ghost teams directly into the mission are and exfil them under heavy enemy fire. The two Higgs-Newby 46-megawatt phase engines produce over 400Kn of thrust and allow for atmospheric and low-orbit flight. The virtual cockpit system provides maximum protection and sensor acclimation to either a single on-board pilot, slaved in via cortical implants, or a remote pilot.

On the nose is mounted a twin-linked 40mm smart-munition cannon capable of engaging armored and unarmored targets at up to 20 km. The Banshee can also carry multi-role missiles systems via its internal bays located on either side of the armored front.

The HADES Banshee is a 15mm Scale Multi-Part Resin Model

A HADES Squad, supported by a Nemesis LSV, conduct a patrol of an abandoned colony...

Working on a new board with GameCraft Miniatures buildings that we jointly designed. They are really easy to put together and they look nice!

Here is a HADES squad with a Nemesis LSV. I need to actually get around to stat'ing theses guys up for SpecOps and running some more solo games. I do have more mercs to paint up too.

Here is my take on a multi-cam uniform: 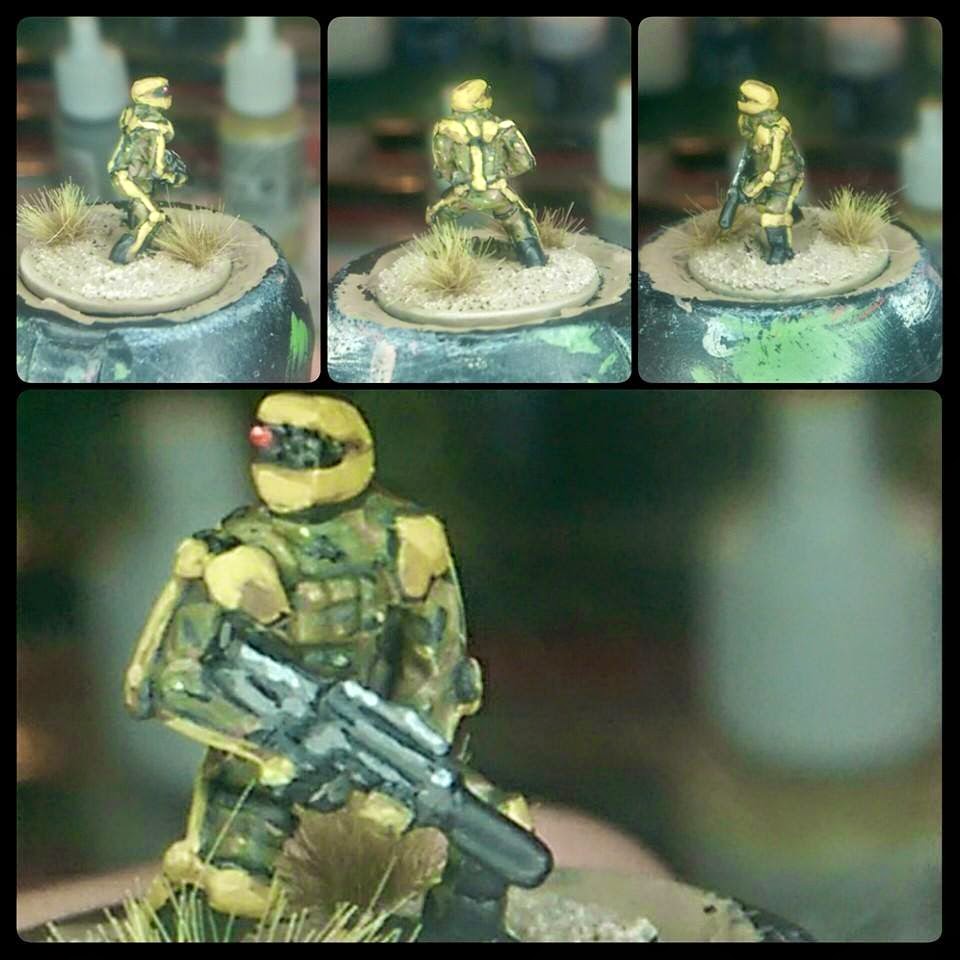 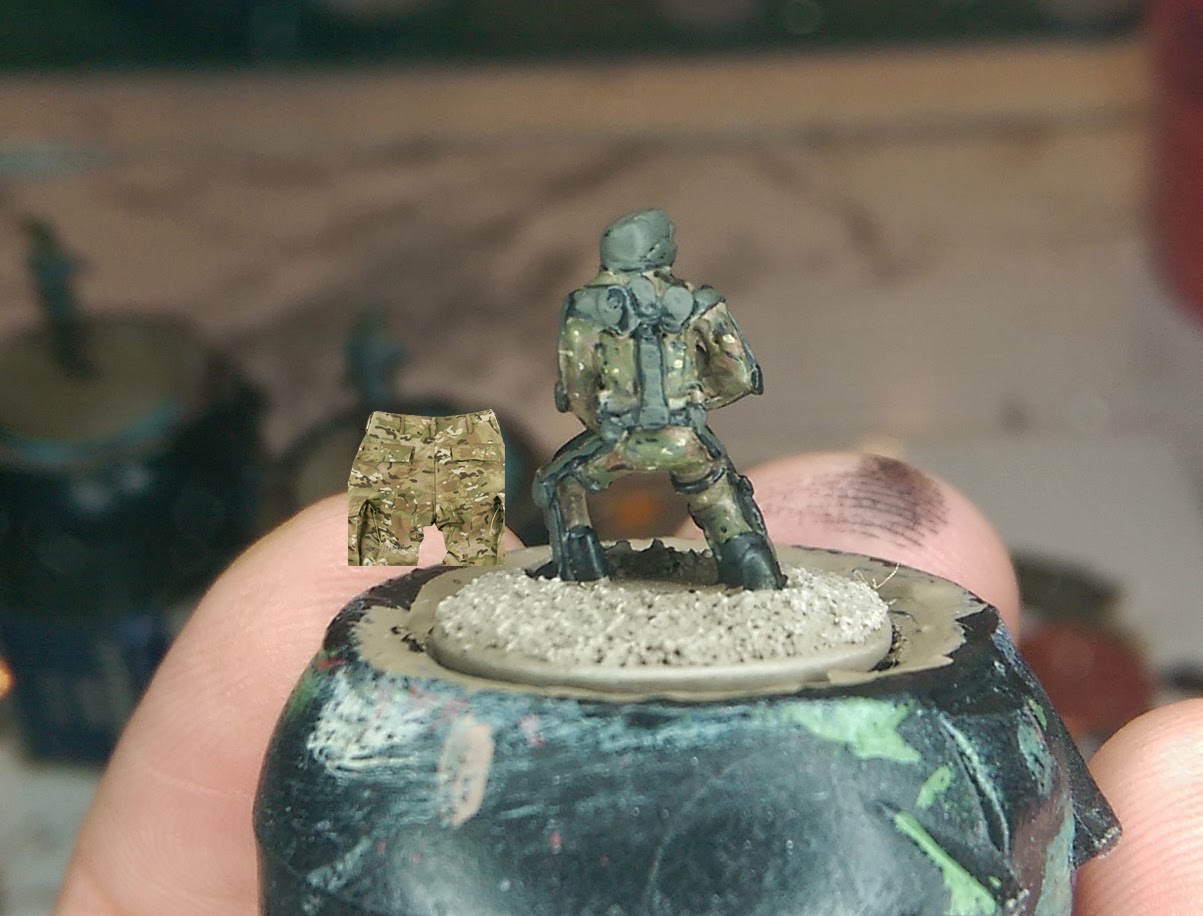 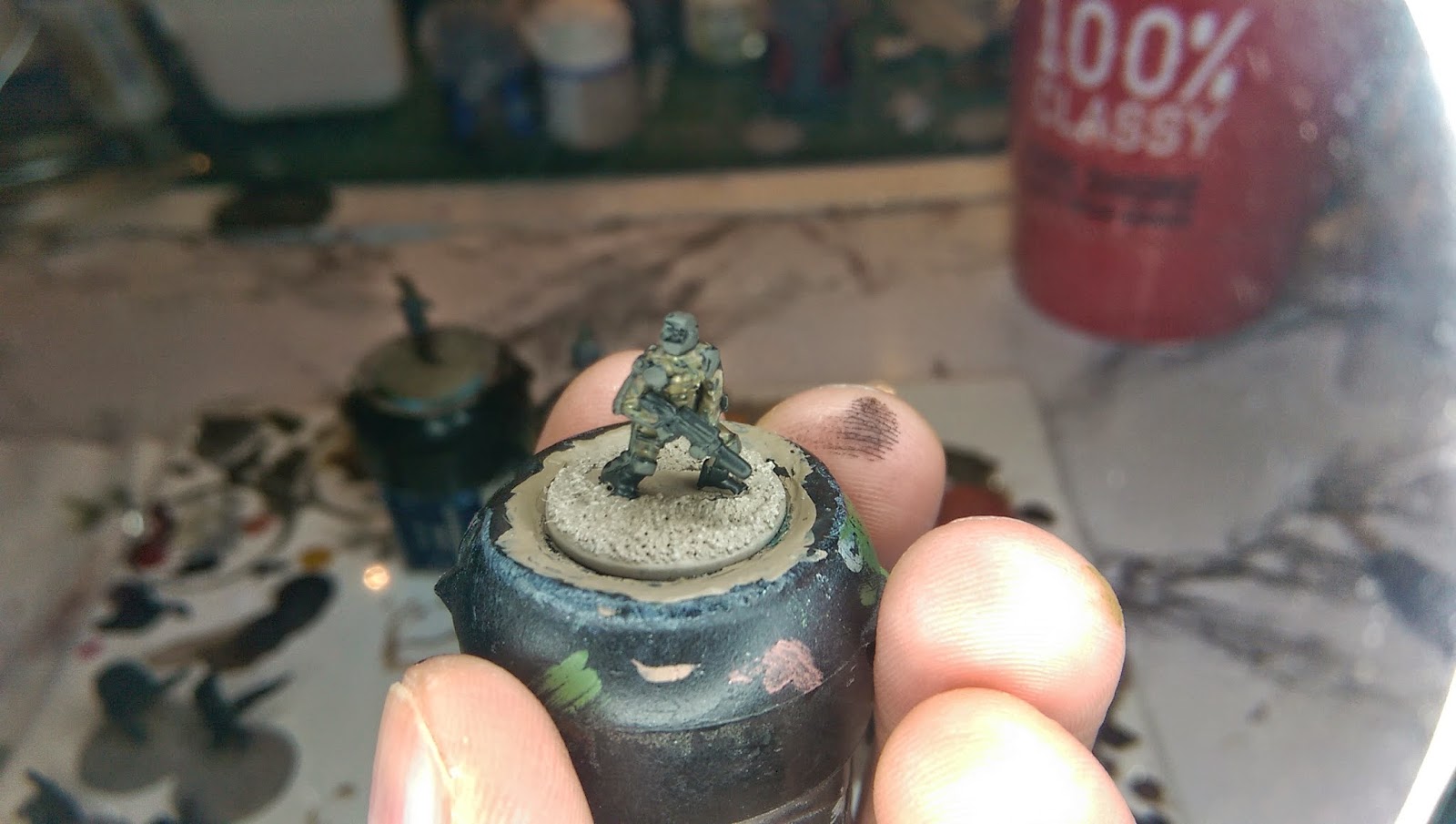 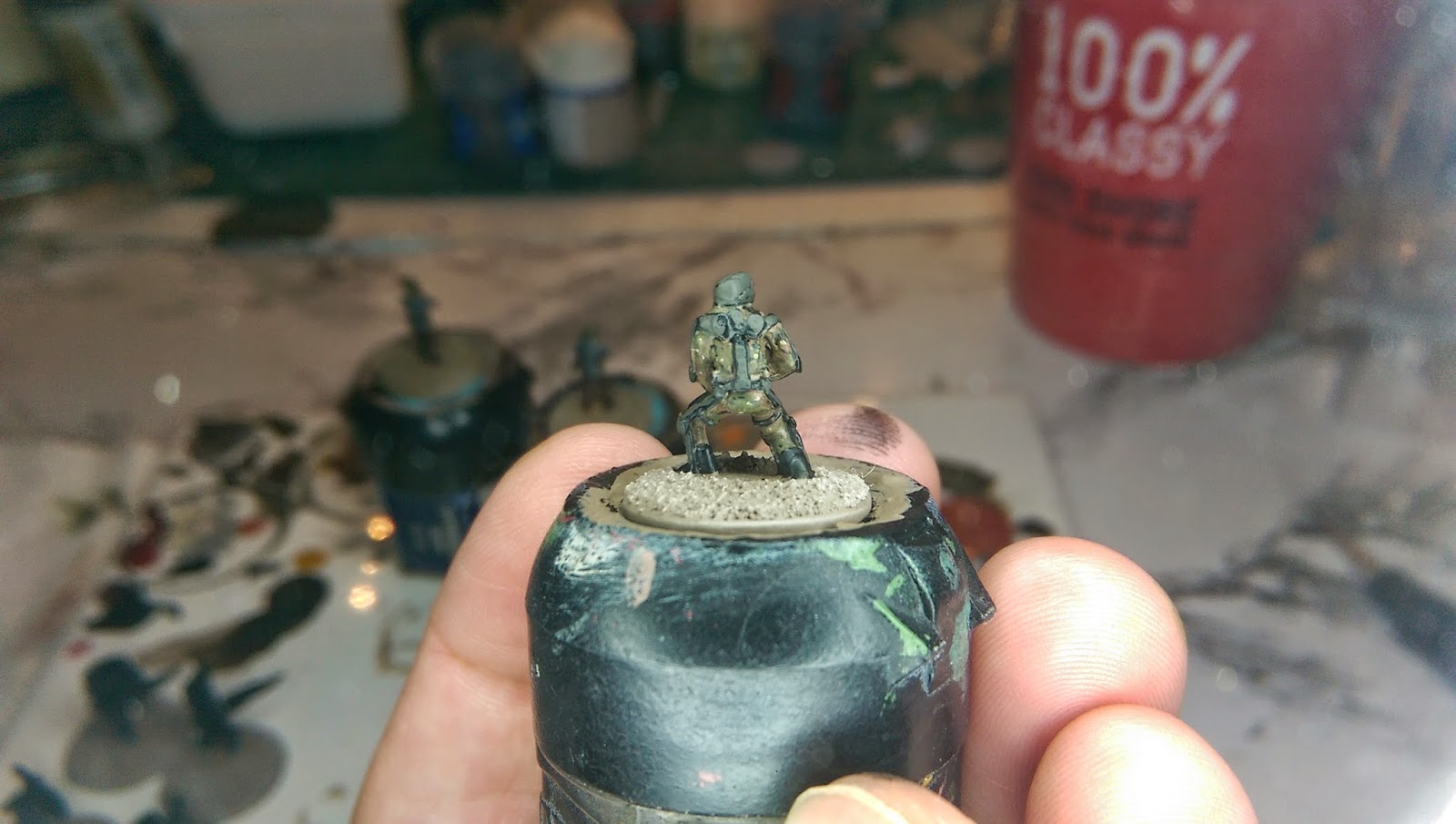 I started with the base layer of baneblade brown, 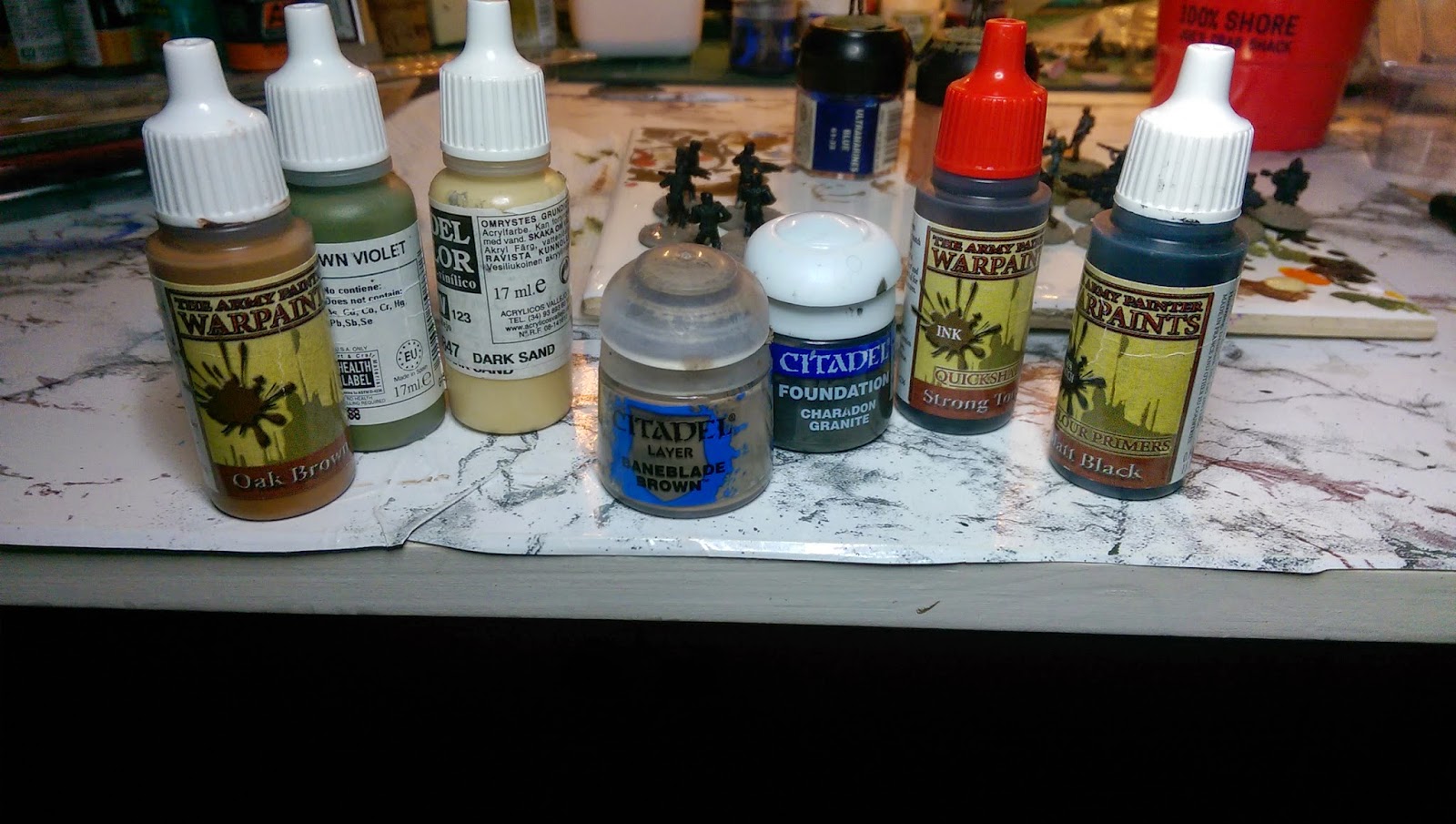 And feedback or critiques are welcome!

What do you folks think?  Do you guys prefer the grey exo-skeleton, or the tan one?

VIDEO: How to paint a 15mm Sci-FI Miniature

I have put together a video showing every step I take painting a 15mm HADES Ghost Team Sniper Operative.


I go over paint choices, brush choices and techniques.

I hope you folks enjoy it and find it useful, please let me know if you have any feedback!

The HADES Ghost Team Squad is available from http;//www.clearhorizonminiatures.com

I'm starting on the writing of the first free supplement for SpecOps - Using Dropships/VTOLs. 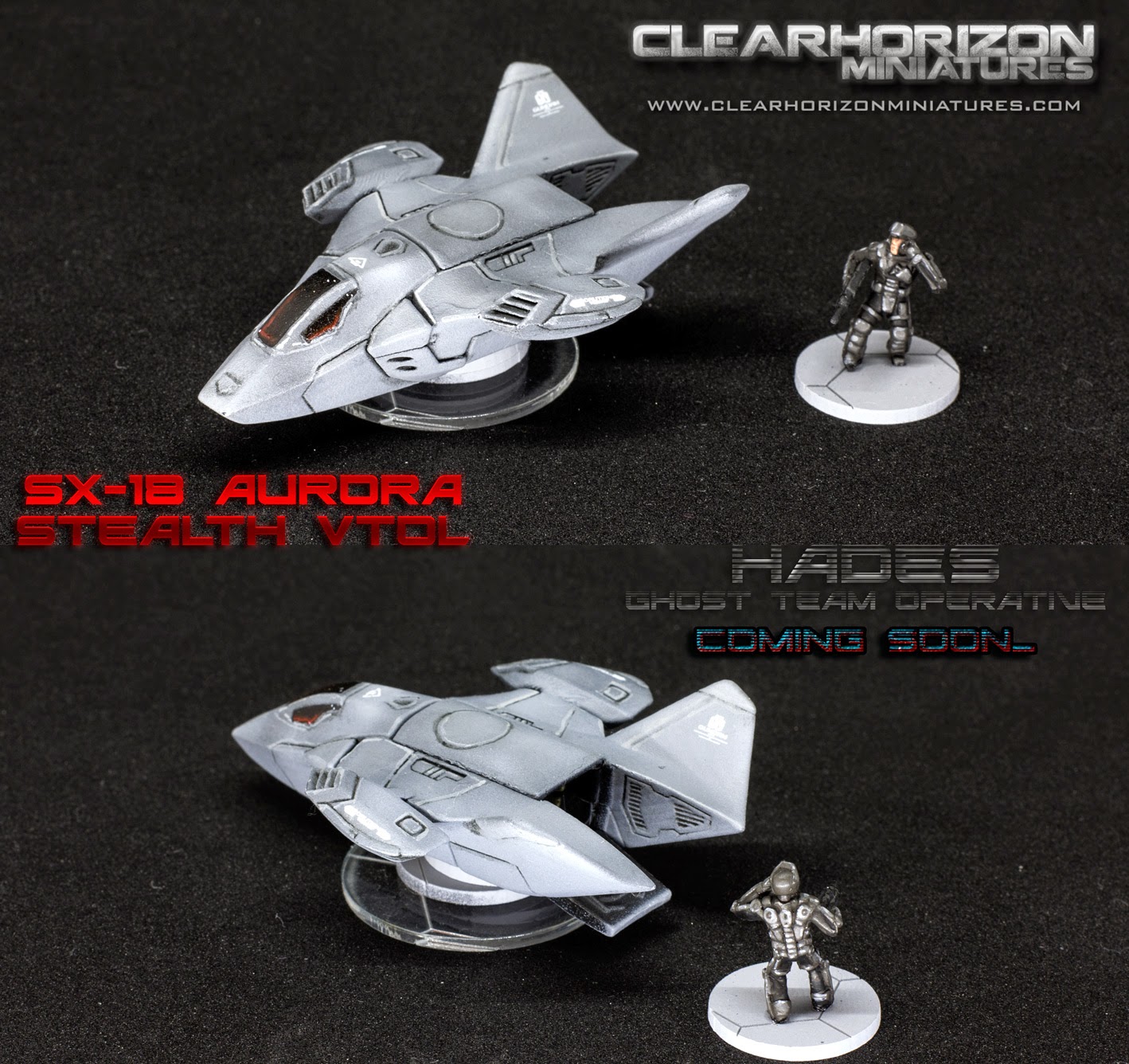 My biggest concern is that if one side has a VTOL/Dropship then the other side needs a way to take it down.
Now, soldiers (once they start to advance) can buy missile launchers, but I'm not sure that's going to be enough. I'm thinking that a more abstract system would work better. Something where the VTOLs can drop off the troops (or exfil them) but can only loiter for a turn or two before they risk being blow up (needing a new mission, and possibly handing the enemy a victory). This would introduce an element of how long do I let my VTOLs loiter before telling them to leave, a risk vs. reward which is always fun.

I'm also thinking if one side bought a VTOL, the other side would get the same number of points to spend on MANPADS, Off-table SAMs, their own VTOLs, interceptors, etc. Basically a separate point pool for both sides. The bigger the VTOL, the bigger the enemy response.

I would have different VTOLs to start based off what I sell: Aurora, Sparrowhawk, Raven, Condor.
What do you folks think? Any suggestions/ideas?
Posted by Mr. Harold at 2/08/2015 07:21:00 PM

My Gruntz Module, SpecOps is now available at Wargamevault.com!

The Gruntz Module i've been working on has now been released for $3.99 at wargamevault.com!

You can get it here: http://www.wargamevault.com/product/143154/SpecOps-A-Gruntz-Module

Here is a quick blurb about it:


SpecOps is a Gruntz Module that brings the exciting second-to-second action of Special Operations missions and campaigns to the tabletop.


NEW TEAM TYPES: Choose from eight different types of teams with their own unique perkz each and further customize your troops with Species Traits to represent Aliens and Humans.


NEW OFF-BOARD RESOURCES: Light up your enemy with a UAV drone, or maybe an orbital strike with your new off-board resources.


NEW CAMPAIGN MODE: Advance your skills, build up your equipment stores and nurse your wounds with the new campaign mode that keeps your operatives from game to game.

The Major from Ghost in the Shell...

This is a miniature from the Rebel Minis Civilian Hunters pack (http://rebelminis.com/hunterspack.html)

I've been a big GITS kick recently and I noticed this miniature sitting on my painting table loose and I realized she made a perfect major!

I've attached her to one of my laser etched bases. 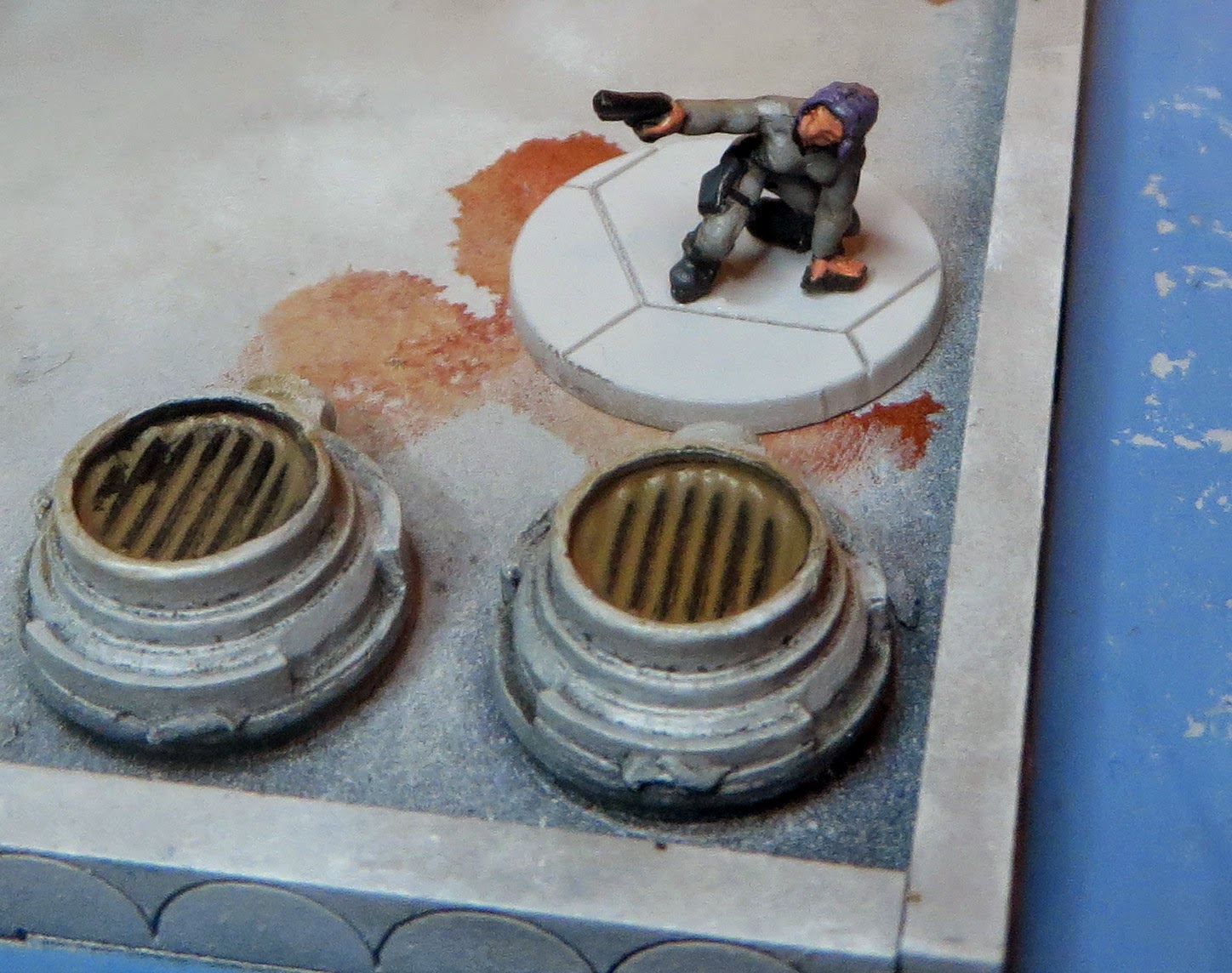 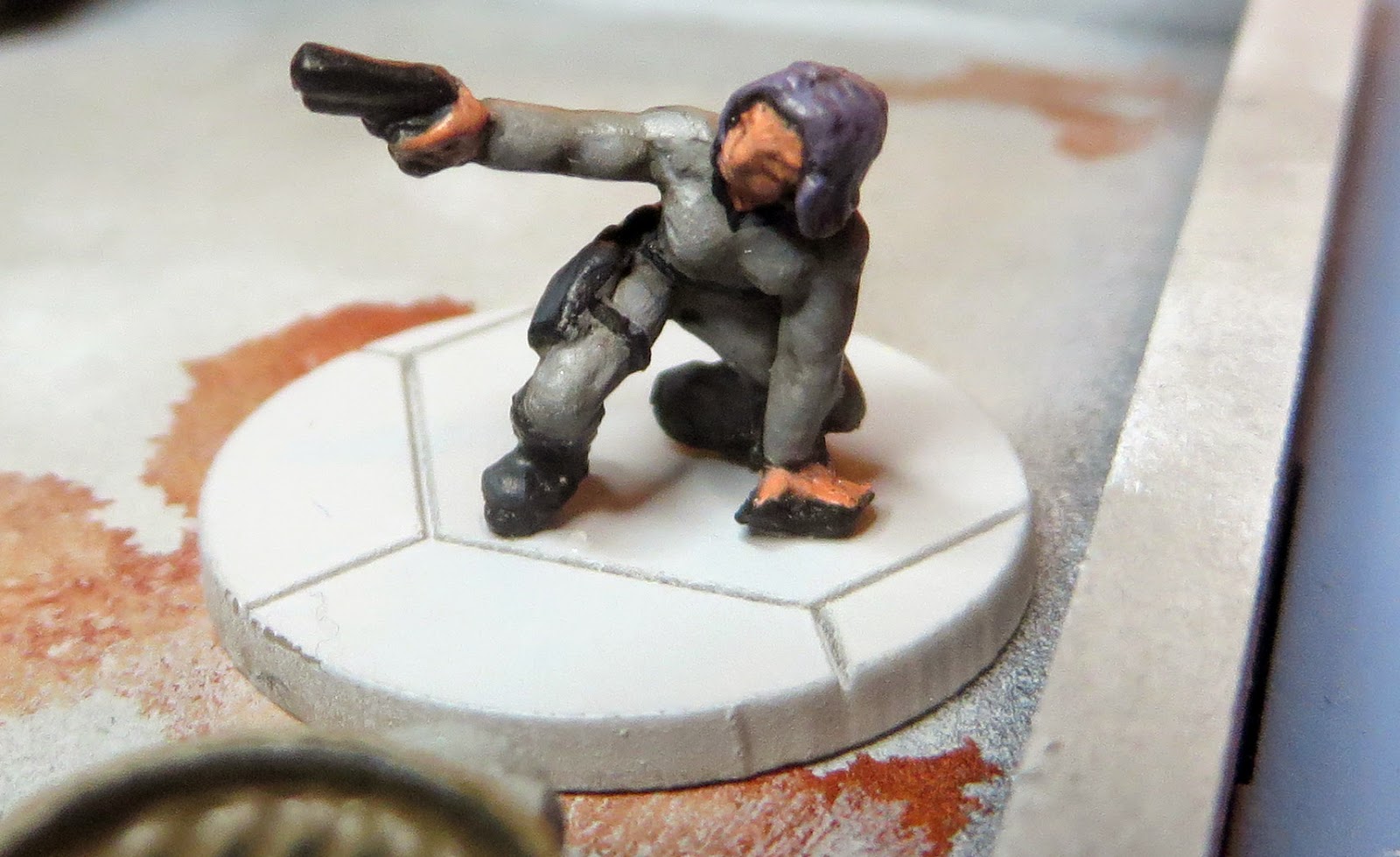 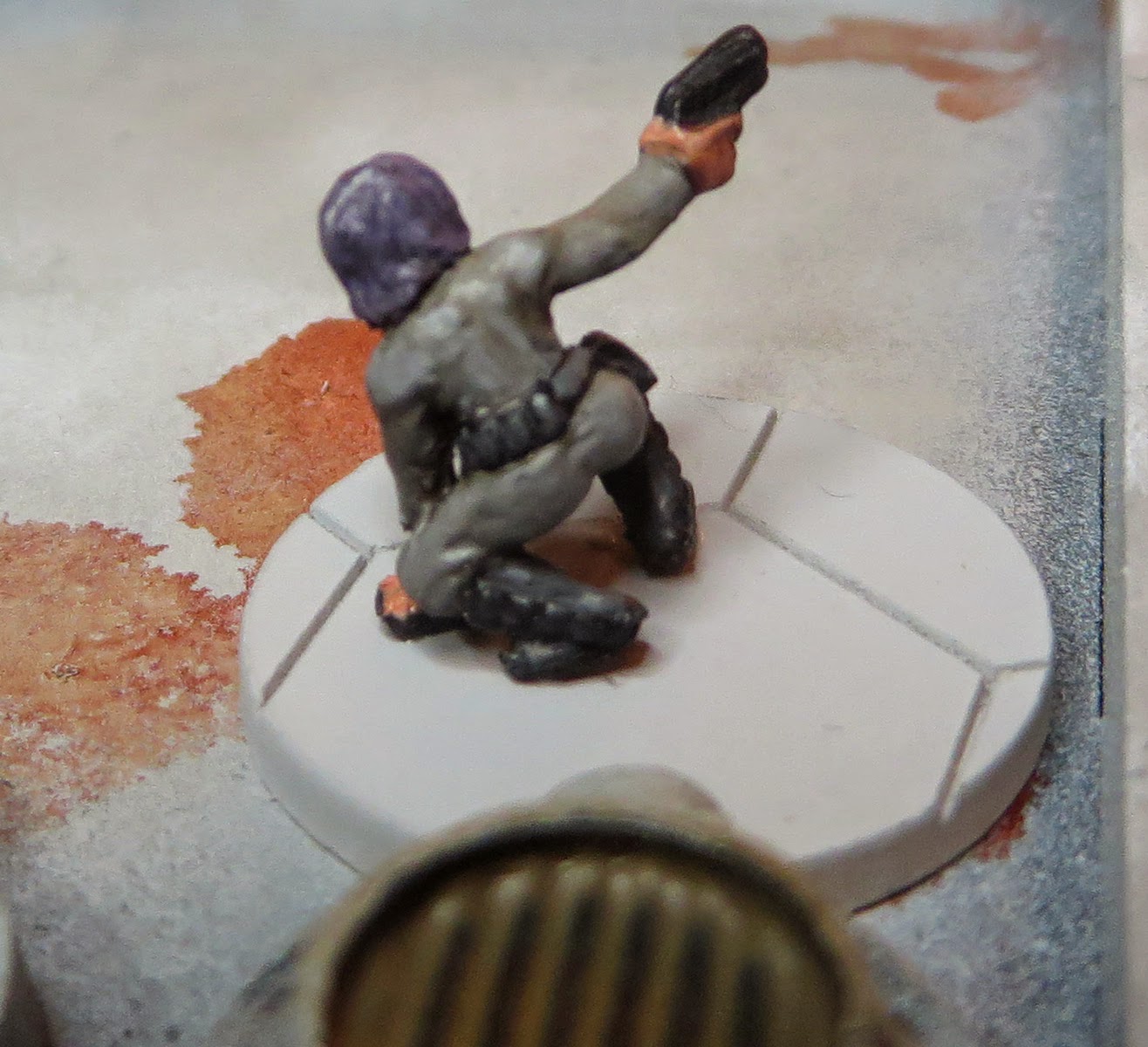 And from the show: 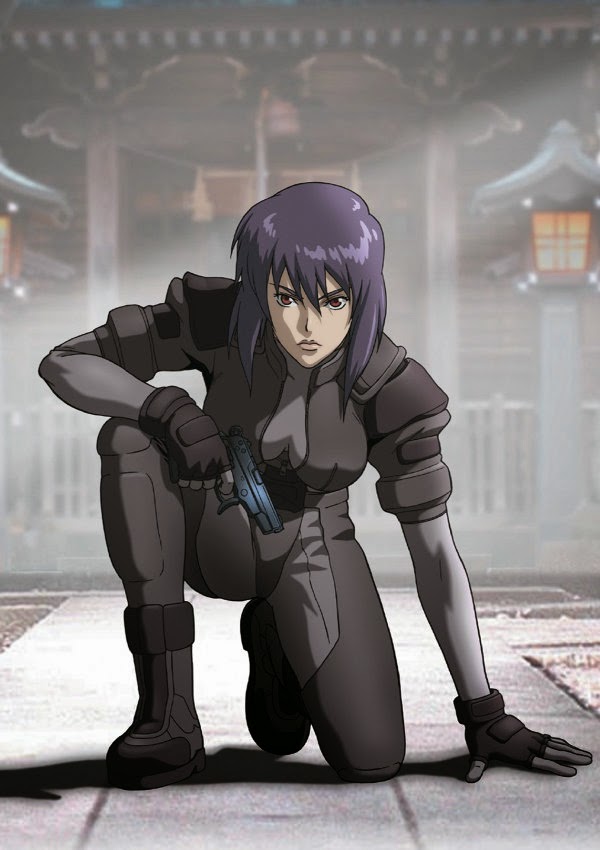 Email ThisBlogThis!Share to TwitterShare to FacebookShare to Pinterest
Labels: ghost in the shell, rebel minis, the major

I've been working on one of my Hell Diver Power Armor figures and I wanted to try some of the AK interactive weathering enamels that I got.

I painted the trooper black, then base coat of light grey on the armor plates. This represented the primer coat.

I then brushed on a thin layer of the AK interactive worn effects.

Once that dried I painted on the base green color I was after.

I then put a little bit of water all over the model and using a stiff brush and toothpick knocked off some of the paint.

This is what i've come up with so far: 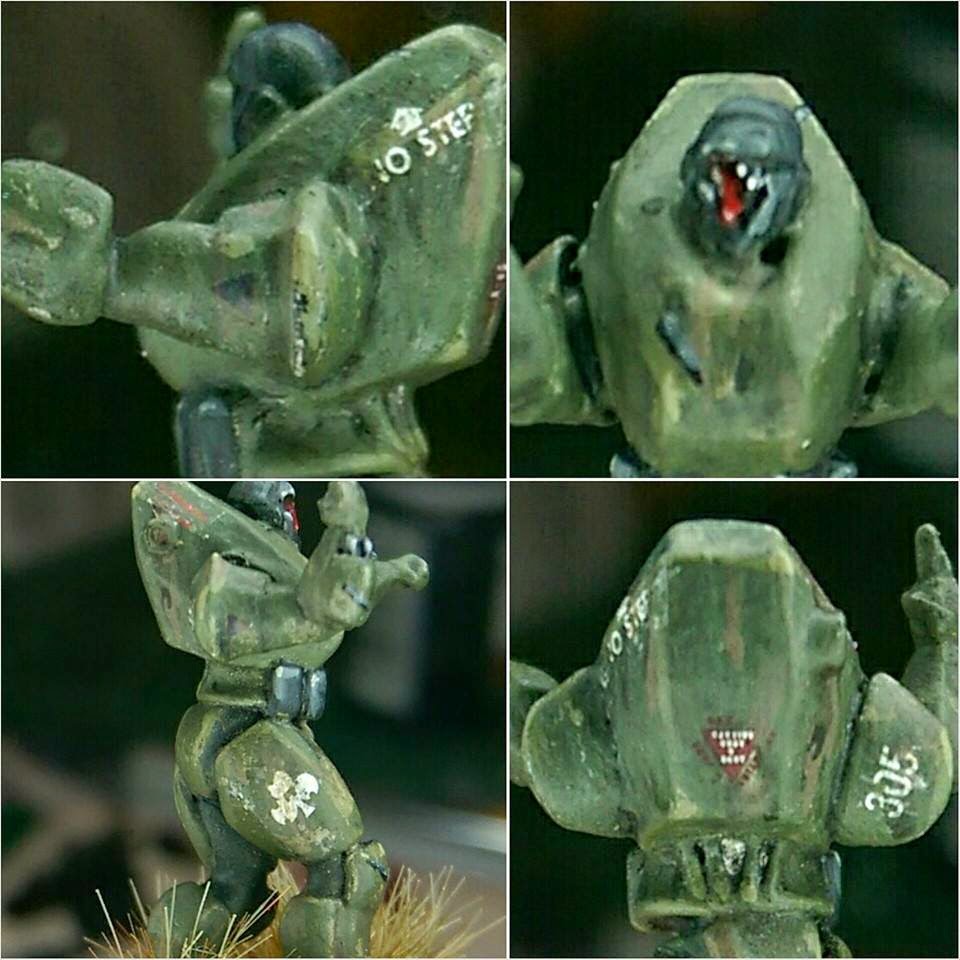 I'll take more pictures soon, and i'm going to try and put together a cool "Scene" shot too.

These tiles are awesome, 1' x 1' and with a really cool styling, perfect for city games. 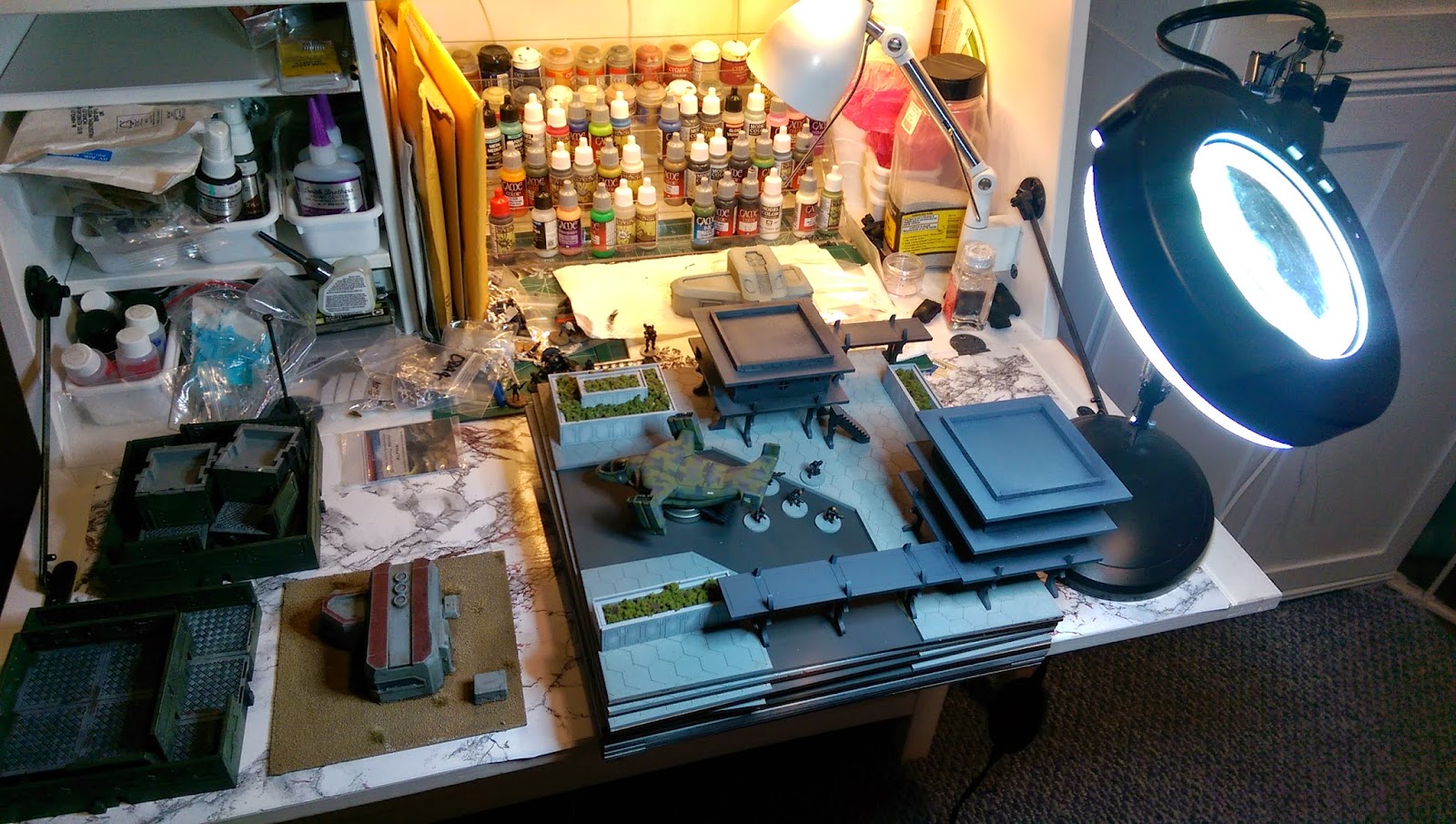 Expanding ECM/Fog of War in Gruntz...

So, there is already a great neural net system in gruntz, but I was thinking about ways to expand it and provide a bit of fog of war.

I'm thinking instead of units on a table each unit would be represented by a numbered token, and each army would get two dummy tokens.

Until a neural net roll is made you have to have LOS to a token to uncover it. Each unit can make a roll as an action, specialized units get bonuses. The rolls would be opposed, with a target number of 10.  The attacking (sensing) unit would have to beat 10 AND also beat the opponent.

The skill stat would govern these checks and there would be perks for improved or less ECM capabilities or stealth.

The BOGINT perk would give an extra token.

Taskforce 414 making entry in a search for a HVT

Going to try this one out tonight: 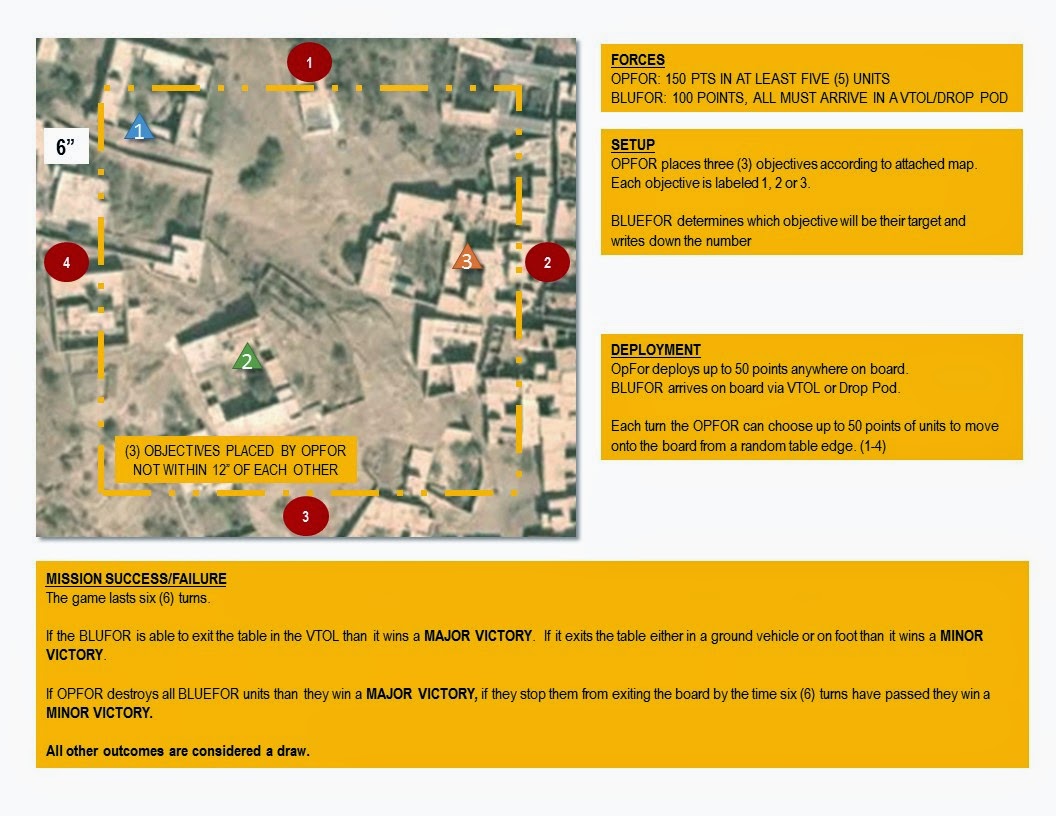 Still have the heads and matte varnish to do... And then putting them on bases.

I'm going to put them on my laser cut acrylic bases, but haven't decided whether to have them on clear bases or painted bases.

What do you folks think of clear bases?

This is a painted version of the base i'll be using:

The Aurora class shuttle transitioned through the field barrier of landing bay Baker-9 of the Deep Space Orbital Research Facility. Through skillful navigation and the advanced technical specifications of the Aurora the craft was able to land without setting off any alarms.

The nacelles angled downwards and the craft settled on the landing bay floor, the interior pressure equalized with the bay’s ambient pressure.  As the pressure equalized the ramp’s locking clamps disengaged and the ramp slowly folded down exposing a dark interior lit only by multi-colored status lights.

Without a sound a white pistol exposed itself from the interior, scanning the landing bay for any hostiles, it held its aim for a few moments before deciding that there was going to be no welcoming party.

The Operative slowly moved from the interior down the ramp with a super-natural grace. The red body suit offset by the back shoulder pads and accents. The mechanical spinal implant glistened with chrome as it flexed during the movement.

There was no mistaking the deadliness of this Operative and she had a job to do.

The Aurora Stealth VTOL is available for pre-order now and comes with an unreleased covert ops team.  Available at http://www.clearhorizonminiatures.com 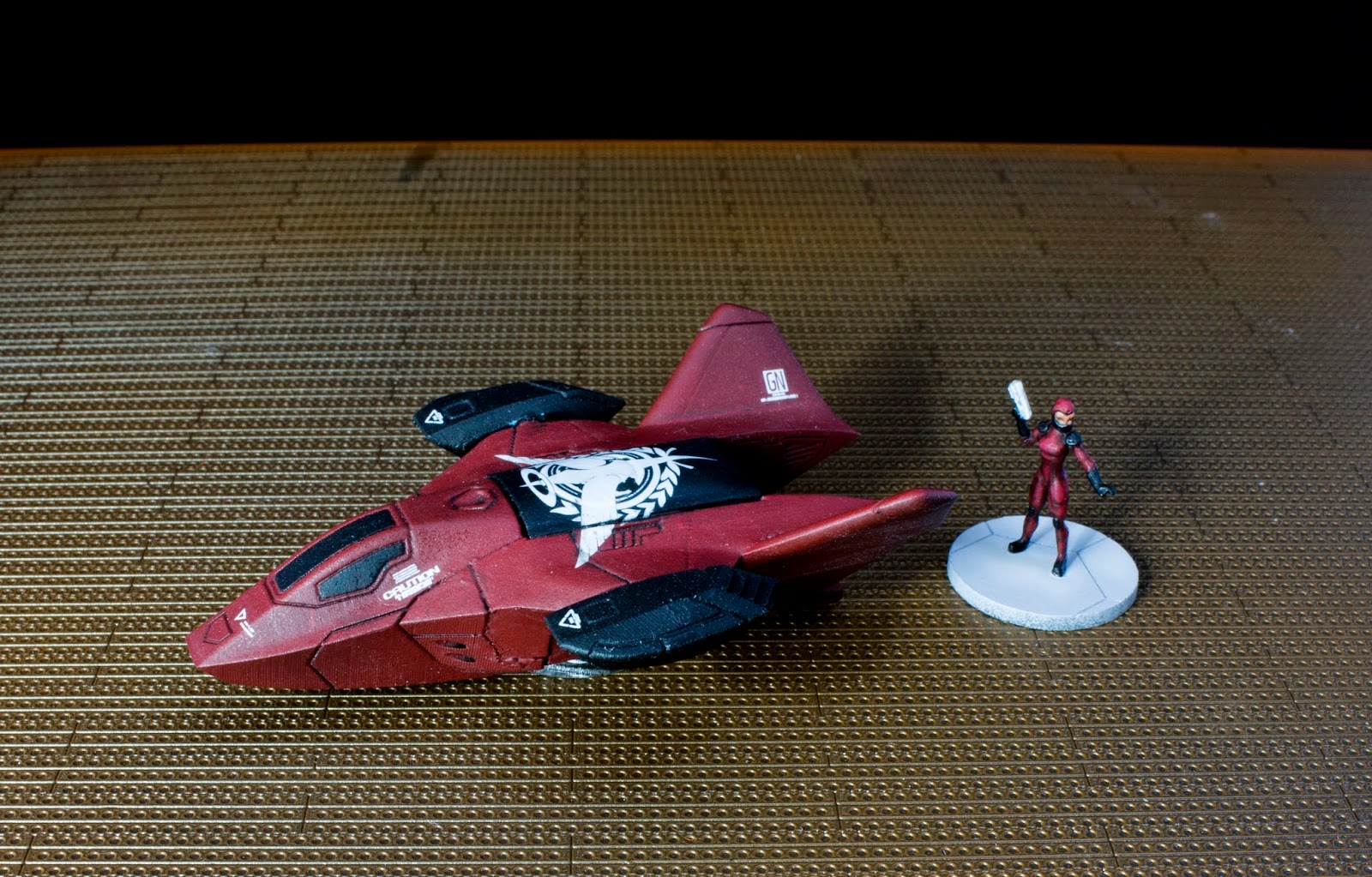 I'm working on the corporate version of the new, upcoming VTOL, the Aurora:

I'm painting the agent in the same colors. I'd imagine this belongs to an executive, or possibly a corporate "cleaner"... 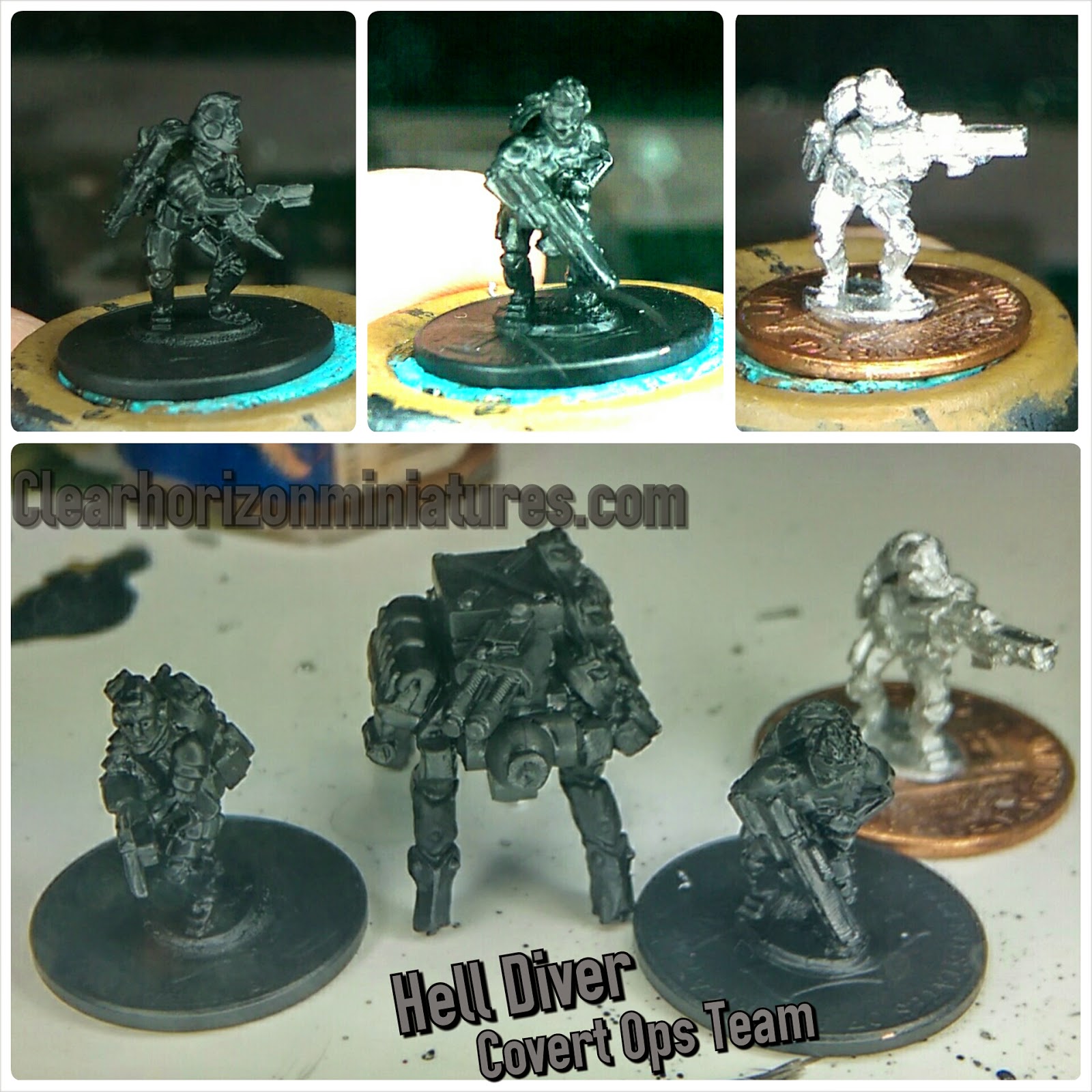 WIP Hell Diver Covert Ops Team… a figure from the Omega pack and two from the Alpha Squad with Omega head swaps.  The CLIFFORD drone pictured in the middle with the optional twin-linked squad support weapon option.

I'll probably put one more figure with a SAW (from the Alpha Pack), and these will be my team for deploying from the upcoming Aurora.

I'm very happy how the head swaps are going so far.  My plan is for these to be painted mostly in blacks (with dark greys) which is one of the reason I wanted the exposed heads so I could add a bit of color. 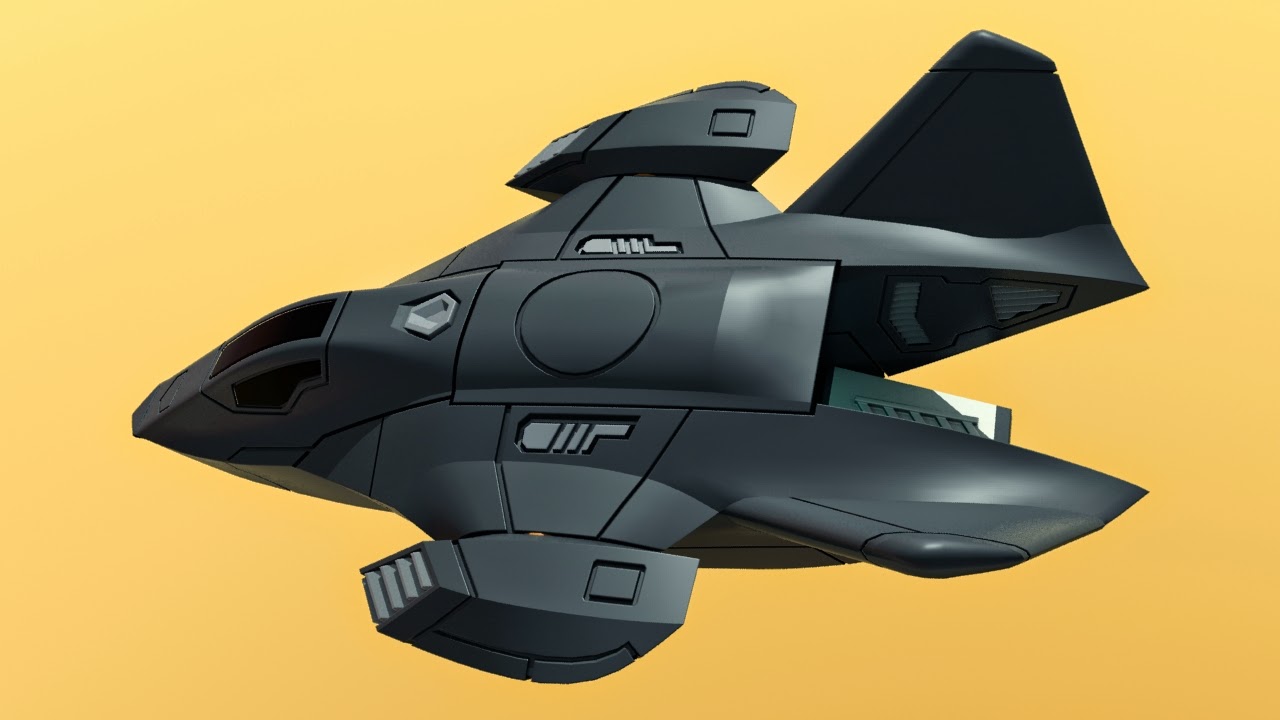 The bases are temporary and will eventually have my laser etched hex bases attached.

The three consoles in a pack.